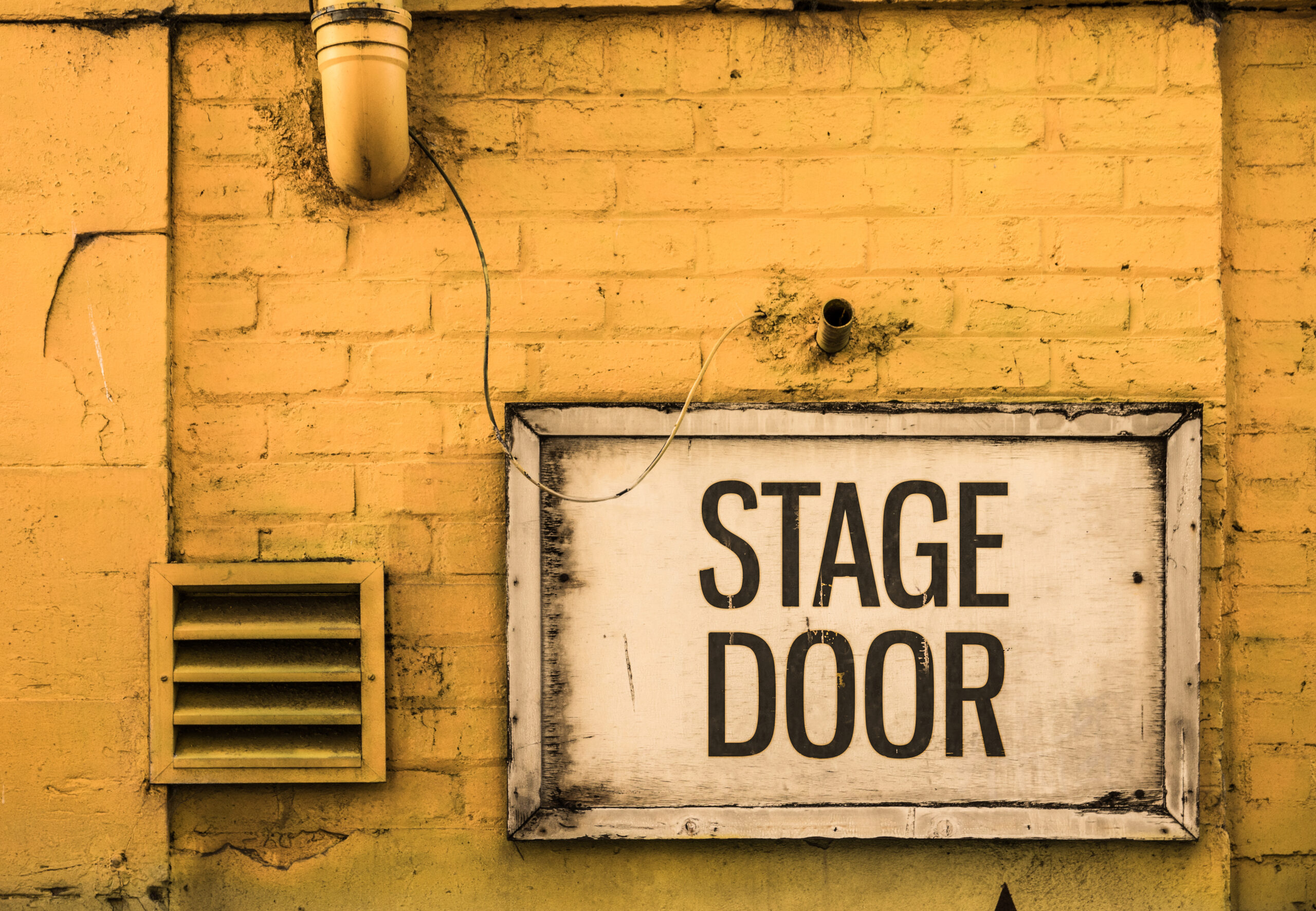 The last time I was told the number of people watching the performance of a script I wrote, there was a national television viewership of forty-four million.  Now, standing backstage, peeking out through the side curtain at the audience waiting for my play to begin, here’s what I counted: eight people in the front row, six behind them, eleven in row three, and fourteen scattered about the theatre, for a grand total of, not counting the usher, thirty-nine die-hard theatre buffs.  Welcome to the lonely world called Off-Off-Off Broadway, about as far away as one can get from the massive number of eyeballs tuning in to watch even the lowest rated Hollywood television program.  Was I disappointed in the meager turnout? Far, far from it.  For me, those thirty-nine souls sitting in the audience, my audience, were so precious, so appreciated, it took all my willpower to restrain myself from racing out and hugging each and every one of them.  My goodness, those people had unlimited options of what to do with their time that night, countless TV shows, dozens of movies, concerts, restaurants, bars, yet they chose to schlep over to a run-down theatre three blocks west of Times Square, shell out their hard-earned ten bucks, sit in ancient, squeaky seats, and endure a stage play nobody ever heard of, starring actors nobody ever heard of, written by a playwright nobody ever heard of unless they were among the vast minority of TV viewers who actually watch opening credits while most are in the kitchen popping popcorn.  Here’s a fun fact from my Hollywood data bank.  The name Gary Kott was seen on television screens for years, week after week, often two times an episode, Written by Gary Kott, Produced by Gary Kott, then there were the triple threats; twice I was asked to be on a show resulting in three credits, Written by Gary Kott, Produced by Gary Kott, Guest Star Gary Kott.  Take the numbers that my name appeared on TV during prime time, multiply those numbers by thousands during re-runs, syndication, and now streaming, and you’d think the name Gary Kott would be a household name.  Yet.  Here’s how many times people have met me and said, “Oh, I know who you are.  Gary Kott.  You wrote for Remington Steele.  Fame.  The Cosby Show.”  How many times did that happen?  Fun fact.  Never.  Not once.  Ever.  There are only two groups of people well aware of my name appearing on television:  1) My mother, and 2) Anyone I went to High School with.  Grammar School.  College.  Hebrew School.  So often, children of people I grew up with would say, “Every time we watch one of your shows, my father jumps up and yells, ‘I went to high school with Gary Kott!’”  Hence, it’s safe to say that nobody that came to see my Off-Off-Off Broadway plays had any idea who I was or what I’d done.  I take that back.  There was a college in Long Island that presented a play I wrote, “As Is the Mother,” in their tiny but beautiful campus theatre.  For publicity sake, the college wanted to advertise my Hollywood credits to enhance ticket sales, however, I was successful in convincing them that since my play exposed a very dark side of motherhood, the audience would be furious that it wasn’t watching a family-friendly sitcom.  A year later the same college, liking a new script I’d written, rented a theatre in New York City, hired a director, a cast, and ran the play for two months.  To justify their production expense, the college absolutely demanded that I include every last one of my Hollywood credits in the press release, not just the ones listed in IMDB that only mentions produced credits, but the pilots I wrote for networks and the movies I wrote for studios still awaiting green lights.  The college’s promotions even mentioned TV commercials I’d written and produced, Nationwide Insurance, Reese’s Peanut Butter Cup, Kentucky Fried Chicken.  The list went on and on, and, frankly, it was embarrassing to me, as I was trying hard to shed my sitcom past and build a reputation as a serious playwright.  How did the shedding go?  It never happened.  No matter what I wrote after I left Hollywood, stage plays, novels, no matter how dark, no matter how complex, I heard nothing but barbs about my tarnished creative past, “Excellent writing.  But a bit on the sitcom side.”  “Disturbingly funny, a dark, bleak sitcom.”   “No doubt why this talented writer was successful in the sitcom biz.”  In time I’d all but forgotten the sage words someone whispered in my ear on the soundstage during my final night working on The Cosby Show, “Gary, no matter what you write in the future, you will wear this television show like an albatross around your neck for the rest of your life.”  Even so, I continued to write stage plays, and most of them were presented by one company or another; “& Sons” at New York’s Actors Studio, “Hard Laughs” at the Santa Monica Playhouse, “Him and His Last Night of Sanity” at the Grove Street Playhouse.  Other playwrights had no problem seeing beyond my checkered past when they read my stage play “And Then.”  A Tony Award winning playwright wrote this, “I always knew that Gary Kott had a great play in him, I just never imagined it would be this great.”  A Pulitzer Prize winning playwright, “Monumental.  The most devastating end of a play I’ve read since Long Day’s Journey Into Night.  It’s what we strive for as writers but rarely achieve.”  Nonetheless, as the saying goes, you can’t win ‘em all.  When I wrote for Hollywood, I made it pretty high up the heap.  In playwriting, the best I could do was Off-Off-Off Broadway.  Oh, I forgot.  One weekend I mounted a staged reading in a neighbor’s kitchen.  Better add another Off or two.

Or, if you have lots of time and want to see what kept me busy during the Pandamic…

During Covid, I continued to write stage plays, and, having no live venues open to present them, and no skilled actors to perform them, I hired the only available one I could find, me, the only director, me, and filmed them in the only production facility I could find, my living room.  Hey, Pacino, where are you now that I need you?