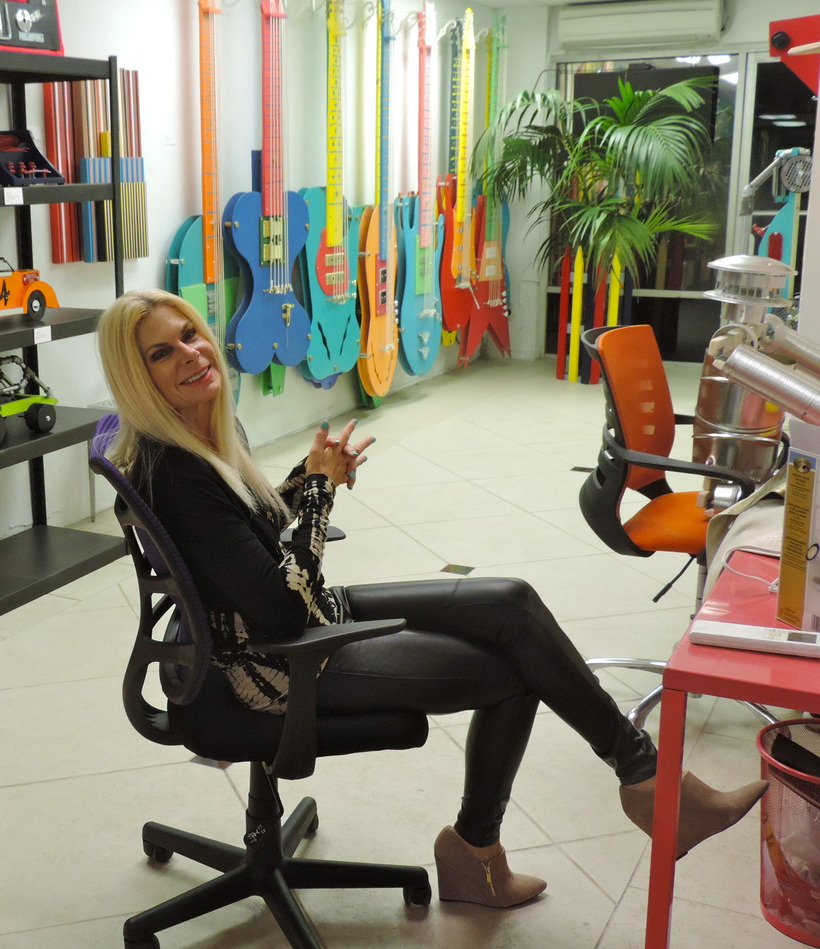 Cue music: “Chapel of Love,” by the Dixie Cups.  Fade In on a man and woman standing in line at the renowned Las Vegas Marriage License Bureau, chatting with a young couple in front of them dressed like Frankenstein and the Bride of Frankenstein.  In a series of dissolves, we follow the man and woman changing into wedding attire in a luxurious Wynn Hotel suite, sitting nervously in the back of a stretch limousine that pulls up to Temple Beth Sholom, greeting the Rabbi and Cantor, ending on an intimate, traditional wedding ceremony far unlike what one would expect from a city famous for its Elvis Wedding Drive-Thru.  My wife Karen and I, both thirty years free of our respective first marriages, formed an impenetrable bond marked by similar traits and backgrounds; honest, loyal, successful in self-made careers not meant for the faint of heart.  Karen started young in the textile industry, built a business from the ground up, slugged her way through a male-dominated work environment, becoming a leading supplier of fabrics to the top fashion designers and clothing manufacturers in Los Angeles.  A contemporary in the rough-and-tumble fashion world once described her best, “Karen is an extremely nice person, but back off Jack.”  Anathema to any garmento worth his or her salt is a frightening nightmare called “unsold goods,” a recurring source of discomfort for Karen from the moment she saw the racks of non-marketed paintings in my workshop.  Pretending to understand my refusal to try to sell anything, Karen chose to honor my wishes, accepting instead the title Home Curator.  For five years Karen had sole discretion of what paintings of mine hung on walls of our house, what sculptures went where, and what pieces were relegated to the garage.  Then one day after seeing a new series of triptychs I produced with precisely controlled drips of paint, Karen finally put her foot down, “I don’t give a damn what you say.  Your artwork is coming out of the closet.  I’m putting on a show.”

“Think Stripe.”  That was the name of Karen’s first show.  While I invited nobody, Karen invited 150 people, 130 of which entered a venue polar opposite of a chic opening in an upscale SoHo gallery.  Karen’s art opening was held in my raw workshop in a run-down industrial center in blue-collar Cathedral City, California.  Certainly, the sophisticated art crowd in attendance had little experience parking their cars in a dank industrial lot, however, they came, they mingled, they stayed.  Karen’s second show, also at my workshop, was equally well attended, however, this time through word-of-mouth, an assembly of local artists and gallery owners dropped by.  One gallery owner asked me to be part of an upcoming show at her gallery that would be displaying aviation-themed artwork.  Informing her that I had nothing of that genre, the owner of the gallery pointed to my found-object guitars and typewriters and said, “You will,” and I did, creating a fleet of aircraft assembled with parts I salvaged from electric heaters, sprinkler heads, water faucet handles.  A very serious art gallery owner perused some of my more whimsical artwork.  Watching him, I thought he’d exit the room in disgust.  However, the gallery owner surprised me by offering one small wall at his upcoming Modernism Week opening, that grew to two large walls and a three-month stint as Featured Artist.  Then came several annual acceptances to the popular Rancho Mirage Artists Studio Tour, as well as the Palm Springs Art Museum Artist Council exhibition in collaboration with the University of California, Riverside.  Two of my wall sculptures, “Picasso Dog” and “Calder Cat,” were selected for the exhibition “Animal Magnetism,” curated by Karen and Tony Barone.  A piece from a series I created (triptychs combining bright color combinations with song lyrics, aka, Edward Ruscha meets Jerry Lee Lewis) were selected for the Palm Springs Annual Juried Art Show, curated by Dr. Steven Nash, head of the Palm Springs Art Museum.  Do I take credit for any of these accomplishments?  Not even slightly.  If it were up to me, my artwork would still be collecting dust in some dingy storage unit.  However, iron-willed Karen Sue Kott, plowed past her stubborn husband, and opened all these doors.  Who knows, if young Karen had decided to enter the art world instead of the fashion industry, she might have given the exalted Leo Castelli a run for his money. 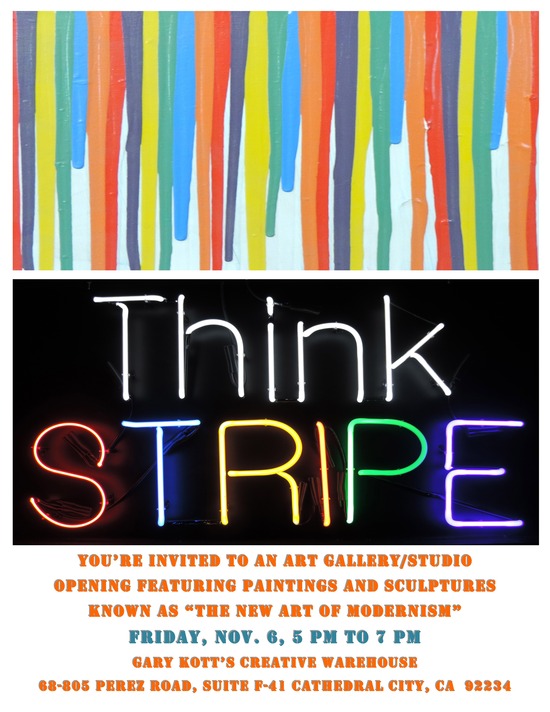 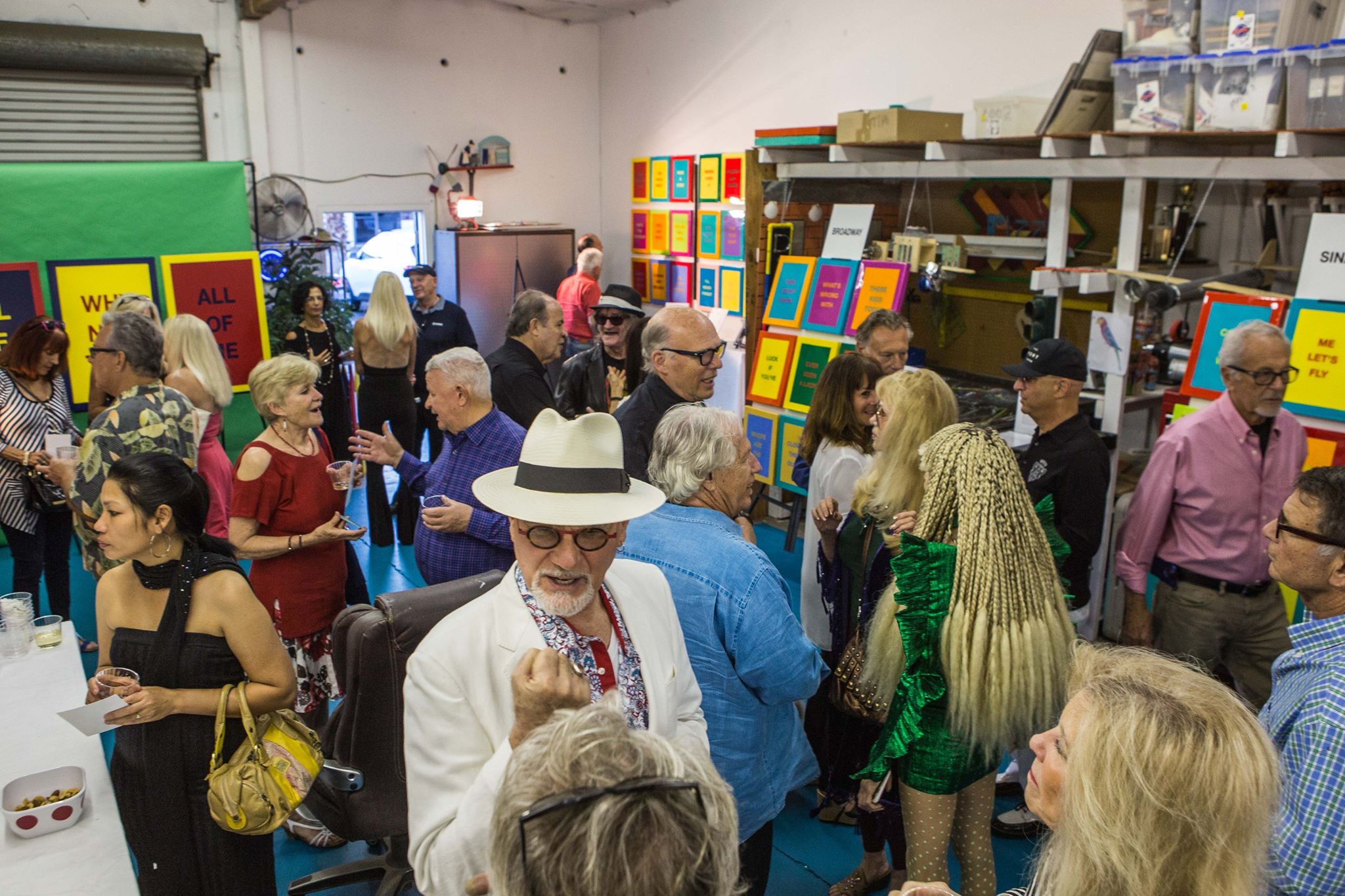 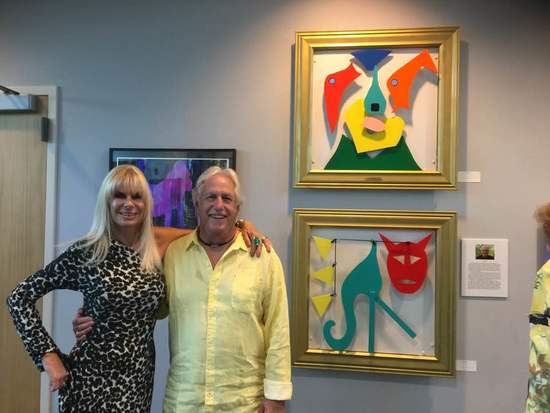 Years ago, thanks to the spoils of war writing scripts in Hollywood, I had an apartment in New York City and a house in Southampton that took anywhere from an hour-and-a-half to four hours by car depending on traffic on the Long Island Expressway.  On one particular day I was stuck bumper-to-bumper in the four-hour version.  Not in any particular hurry, I decided to ditch the traffic, take the next exit, and explore middle Long Island.  Once free, I was cruising along a back road when I saw a sign pounded into the shoulder, “Guitar Show.  Two miles ahead.”  Hmm, I pondered, guitar show, music, I think I’ll stop by and listen to some afternoon rock ’n’ roll. However, once parked and inside the building, I was surprised to discover that the “Guitar Show” offered no music, but instead, booths-full of, well, guitars.  Seems I’d arrived at a trade show teeming with guitars of every make, every model, Fender, Gibson, Gretsch, Epiphone, all the rock-band All-Stars.  It was a kaleidoscope of shapes and colors, stacks of electrics, acoustics, basses, double-necks, the kinds Hendrix played, McCartney, Clapton, and, yes, me, though I must confess that after years of practice I never advanced musically farther than the three chords required to play badly the song “Hey Joe.”  Then I saw it.  The most visually stunning eye-candy I’d ever seen.  An entire wall of guitars hanging from ceiling to floor, ten feet top to bottom, four-feet wide, dozens upon dozens, beckoning me to inquire of the vendor, “How much for the entire wall?  I want them hanging in my living room.”  Back in my car I was still reeling from the reality that the price-tag of all those guitars, most collectors items, would require me to sell my Hampton house, my cars, and, ugh, return to Hollywood and write more scripts.  By the time I reached Riverhead, my mind had calmed down and wandered to another hmm.  If I can’t buy that wall-full of guitars, what if I make them?  After all, I’d already managed to produce in my art studio an impressive display of found-object sculptures, typewriters, cars, hell, I even reproduced a pretty darn good replica of Southampton’s Old Hook Windmill.  My hmm leaped to action, and in minutes I was inside Home Depot buying wood to carve out guitar bodies, hardware to represent pickup switches, tremolo arms, tuning pegs.  My obsession turned into a winters-worth of work, designing, building, and painting guitar after guitar, dozens of them, until, lo-and-behold, I finally had a wall-full, ten-feet ceiling to floor, four-feet wide, the exact dimensions I’d seen when I followed a sign pounded into the shoulder of a road, “Guitar Show.  Two miles ahead.”   Over the years, my wall-full of guitars thinned out to a few here, a few there, and the rest in storage until I recently gathered them together and, once again, hung them en masse (save for one hanging in my office, squint your eyes and it looks exactly like Keith Richards’ 1953 Butterscotch Tele).  The rest can be seen in my Santa Fe art studio.  Just pull off the LIE and follow the sign, “Guitar Show.  Two-thousand miles ahead.”